For several years there, Frank Whaley was the go-to filler. A staple of mainstream and indie films of the ‘90s, Whaley was featured in dozens of small roles, continually delivering solid performances. No matter the amount of screentime, Whaley had a unique ability to make his characters essential to the story. Simply put, he always excelled, despite, or because of, the material he was given. We haven’t seen much of Whaley lately, but I never fail to smile when he randomly pops up on TV. Whaley is living proof that if you have that true skill of a gifted actor, it’s a skill that stays with you forever. 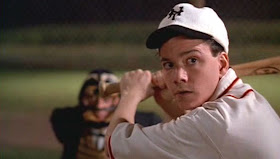 Field of Dreams is a film for dreamers, but in many ways, it’s a film about words. From the hushed whisper of “If you build it, he will come,” to James Earl Jones’ headlight delivery of “Go the distance.” The marvel of the film is that the repetition of these phrases never grows old. In fact, they become more powerful with each utterance. So, perhaps you’ll understand my appreciation for Frank Whaley’s work in the film, when I tell you that my favorite moment from Field of Dreams is when Whaley informs us that, “I’m Archie Graham.”

The moment Whaley says this, the entire movie becomes something different. Its fantasy is solidified, its magic is real. And sure, Whaley has fun playing a pick-up game later in the film with a bunch of legends, but nothing tops the delivery of that line. Whaley had to have known the importance of being the young Archie Graham, but the subtly in which he introduced himself made the whole film even more unique. 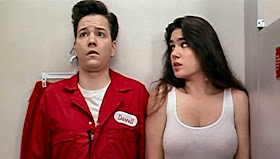 When I was a kid, Career Opportunities was a staple on cable, recycled day in and day out. If I happened to come across it, I watched it, no questions asked.

The movie is about Jim Dodge, an aimless young guy who is pressured by his old man to find (and maintain) a paying job. Soon into his first shift as a night custodian at Target, his new boss locks Jim inside the store, and says he’ll return at 7 a.m. to retrieve him. Moments later, Josie (a young Jennifer Connelly) appears from a dressing room, having awoken from an accidental nap. Trapped inside a giant store with nothing to do, the two run around, goof off, and try not to fall in love. Jim and Josie are quintessential John Hughes characters (Hughes penned the script); he’s the kind-hearted, broke loner, and she’s the confident, rich, popular girl next door. And while the film gets needlessly bogged down with silly sensationalism, nothing takes away from the charm of Whaley and Connelly. Their innocent, believable chemistry made for one of my all-time favorite Hughes couples. 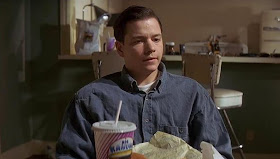 I could sit here and write a few paragraphs as to why I love Whaley’s brief turn as the doomed Brett in Pulp Fiction, but that is frankly unnecessary. All that needs to be said is that, through Brett, Whaley delivered the single most shattering utterance of the word “What” in, perhaps, the entirety of film history. Say “what” again. 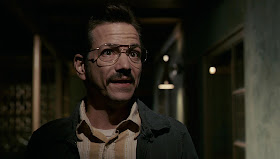 Nimród Antal’s Vacancy is a completely decent, at-times appropriately shocking experiment of a couple being stalked by killers. This is thanks much in part to Whaley’s atypical performance as a creepy and murderous motel manager. When you start Vacancy, you know you’re getting yourself into a horror film. And by the time the amicable-if-not-creepy Mason shows up, you suspect he’s the villain. Despite deducing this, it’s thrilling to watch Whaley play a character unlike any he’s played before. It’s an effective role reversal that Whaley fans like myself never expected, but cherished all the same. 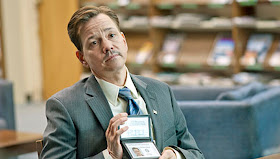 Van Miller is a great Frank Whaley swan song; the type of role that could put Whaley back in the running after an extended absence from mainstream fare.

Liev Schreiber plays Ray Donovan as a Michael Clayton/Winston Wolf hybrid – a Hollywood fixer for the rich and famous. One of finest qualities of the show’s strong first season was the quirky and foreboding Van Miller, an FBI agent trying to get dirt on Ray and his family. Some reviewers have accurately referred to Whaley’s portrayal of Miller as reminiscent of Kyle MacLachlan’s Dale Cooper from Twin Peaks. He’s a guy who’s sharp, but a little off. Odd, but not dumb. You’re never quite sure about Van Miller; a man wrapped in mystery, but played with amusement.

The Best of the Best
Swimming with Sharks (1994)
Guy 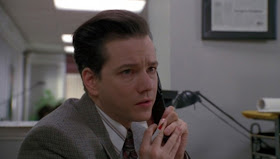 Swimming with Sharks is one of the best, most vicious Hollywood satires ever made. A horror show for those looking to find glory in the movie business. It contains a criminally overlooked performance from Kevin Spacey, not to mention the finest, most dedicated performance of Frank Whaley’s career.

Guy is a young, idealistic writer fresh out of film school. He’s made his way to the lavish hills of Hollywood with plans to crack into the biz. His first real job is working as an assistant to Buddy Ackerman (Spacey), a tyrannical movie mogul who puts Guy through utter hell. Buddy is as crude, harsh and ferocious as they come, forcing Guy to do numerous degrading things throughout the day. But the wonder of Whaley’s work is that he never plays Guy as a victim. Sure, he’s initially miffed by his boss’s constant humiliation, but the film never turns Guy into cowardly prey. Instead, Guy flips, both emotionally and physically, resulting in an extended and haunting sequence that displays Whaley’s best work.

In noting how terrific Whaley is in this film, it’s obvious that the man is perfectly capable of sustaining a lead role. Why he hasn’t been presented more such roles in smart, excellent films is beyond me. The man can hold his own, and then some.